Downtown East, Minneapolis Minnesota is a small historic mill district that has seen the erection of new commercial and residential towers in recent years. It is located at the heart of the city surrounded by the Mississippi River to the north, Interstate 35W to the East, Portland Avenue to the west, and the Fifth Street South to the south.

The city is a hub of residential, commercial and recreational spots. Most young professionals prefer living Downtown but the residents are quite liberal. The opening of the massive U.S. Bank Stadium which hosted the 2018 Super Bowl has also substantially contributed to the expansion. 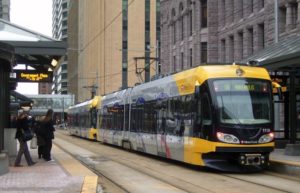 Downtown Minneapolis gives its 2,355 residents a suburban feel with most residents owning their homes.The cost of living in the greater Minneapolis area is approximately 5% higher than the national average but still quite affordable compared to other cities like New York, Chicago, and LA. The median house price was about $242,000 in 2018 with the average rent of a one-bedroom apartment being $1,223 and a two-bedroom apartment is $1,637. Thankfully, these costs are offset by the high wages in Minneapolis.

There are new shops and restaurants mainly located along the Mississippi River waterfront which cater to resident and visitors alike. Other amenities in Downtown East include the light-rail access, the new Radisson RED hotel, high-tech loft and the popular Downtown East Commons – the “calming escape” from Downtown East’s urban life.

Things to do in Downtown East

Downtown East has got quite an assortment of bars, coffee shops, restaurants, and parks. It is also home to some of the greatest fine arts centers like the Guthrie Theatres, MacPhil Center for Music and the Mill City Museum.  If the arts don’t interest you, you can still enjoy the vibrant sports scene.  The Target Field is located to the west of Downtown where you can see the Minnesota Vikings and the Minnesota Twins in action.

Getting around Downtown East is fairly easy.The town is quite compact and you can easily walk from one place to another. If you drive, expect to pay hefty parking fees especially during busy periods. Public transportation is also smooth and effective in Downtown East. Bus routes serve the downtown while the METRO Blue Light Rail Line passes through the neighborhood.

If you are looking for a fast-growing, alive and idyllic city in Minnesota, consider putting up shop in Downtown East. Here, you and your family will enjoy a clear connection to downtown, open space and a wide range of attractions every month of the year.