Located in Hennepin County in the Southeastern part of Minneapolis, Marcy Holmes is a diverse neighborhood bordered to the south by the Mississippi River, the 15th Avenue SE to the North, the University of Minnesota to the East and the Central Avenue to the West. It is the oldest neighborhood in the Minneapolis rich in history and natural beauty. The current population stands at 12,678 and is considered one of the greatest places to live in Minnesota. 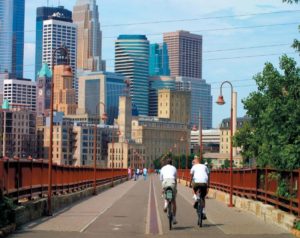 Marcy Holmes neighborhood may be old but it is slowly catching up with other nearby cities like Dinkytown. It has a diverse collection of older homes and buildings but the University of Minnesota is enhancing the emergence of newer, modern units to cater for the influx of students. The people in Marcy Holmes are also quite friendly, promoting a deeper sense of community. Expect a stranger to walk up to you and shake your hand. This is quite the norm here.

Minneapolis is a renter’s best place. Most homes here aren’t for sale. Those who opt to purchase a home would have to part with $250,000. This figure compared to the lease which averages $750 per month makes renting the most preferred option.

On a sunny weekend, you will probably see couples walking their dogs, bikers filling the river trails, and elderly people sitting by the park benches. Then there are the professionals who would be at the office and the students in the classroom or wasting the day away in a bar.

Things to do in Marcy Holmes 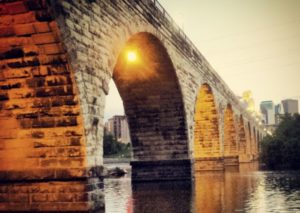 Marcy Holmes is well connected with an abundance of easily accessible highways. The 8th Street and the Stone Arch Bridge are especially perfect for both bikers and walkers. With a quick bike ride, you can see plenty of attractions, including the Marcy Holmes Community Garden, Frey Mansion, Florence Courts, B.O. Cutter House, First Congregational Church, and the Sixth Avenue Gateway.

Marcy Holmes’ close proximity to Dinkytown makes it an attractive city to live. Dinkytown business district caters to the neighborhood, region, and campus area with a perfect blend of businesses. Take a trip to the city when Marcy Holmes becomes a tad boring.

All in all, Marcy Holmes is a good place to put up for the long haul. If you can afford to ignore the drama and inconvenience sometimes brought about by the high number of university students, the city will open itself up to you. You will thrive in its recreational amenities, quietness, sense of community, and its natural beauty.